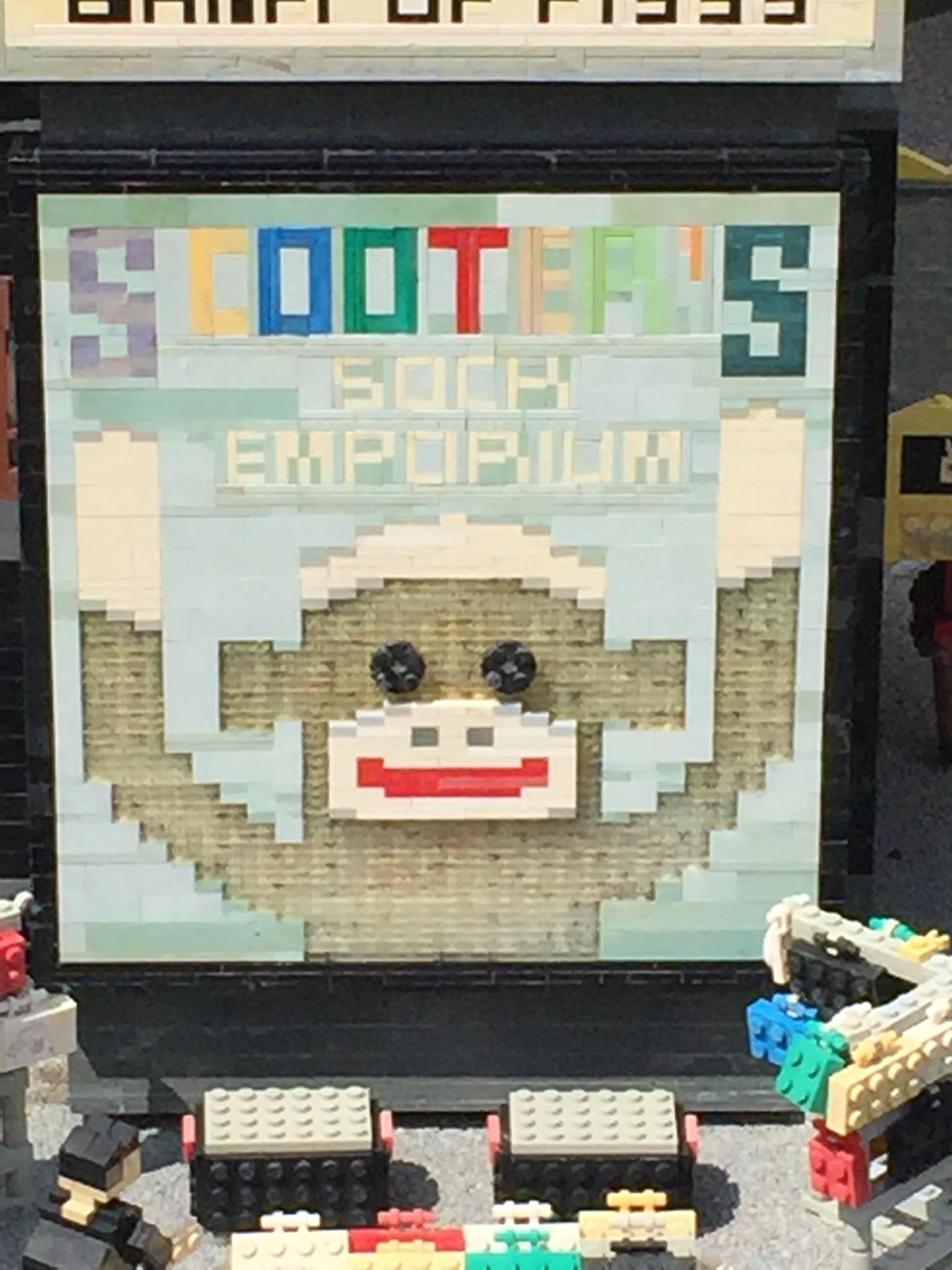 This masterful objet d’art sent to us by a reader on a family trip to Legoland in Florida.  Legoland really ensuring they live up to their tag line, “Awesome Awaits” with this dedicated display of a classy and handsome portrait of everyone’s favorite sock-specialty-store simian, Scooter.

This is a period piece dating back to mid-1900’s. Scooter and his Sock Emporium flourished during the heyday for both socks and emporiums – 1894 thru 1897.  Scooter’s grandson, single-handedly crafted this homage to his legendary grandfather out of the Legos he received as a birthday gift around 1940.

Scooter got his start in the world of hosiery retail not in an emporium but on foot, working the tropical beaches frequented by Americans, Europeans and Australians, selling socks and sunglasses out of a back-pack.  His real name was Michael Murphy, and he earned the nickname “Scooter the Sock Simian” with his style of quickly scampering from person to person, hawking his wares up and down the beach from from dawn ’til dusk.  When Michael left the beaches of the tropics to start his emporium in the USA, his nickname was shortened to just “Scooter,” because most people in the US didn’t know what “Simian” meant.

Dave, that sounds a little far-fetched.

You guessed it.  That’s the story that Michael’s family would like you to believe.  Legend has it that Michael fancied rum.  Early in his beach-merchant days, he leveraged his evolutionary advantage of having opposable thumbs on his feet and a prehensile tail to sneak into the tiny thatched-hut beach bars and help himself to bottles of rum, 3 at time.  Everyday, the bar staff could be heard up and down the beach shouting “Shooo!” and “Scoot! Scoot!” (because that’s what people yelled back in the 1800’s to shoo away animals) as they waived their arms in a sweeping, broom-like manner to scoot Michael out of the bars.  Thus, the name “Scooter.”

Scooter’s Sock Emporium Portrait in Legos can be seen at Legoland, FL.   http://www.legoland.com/florida/