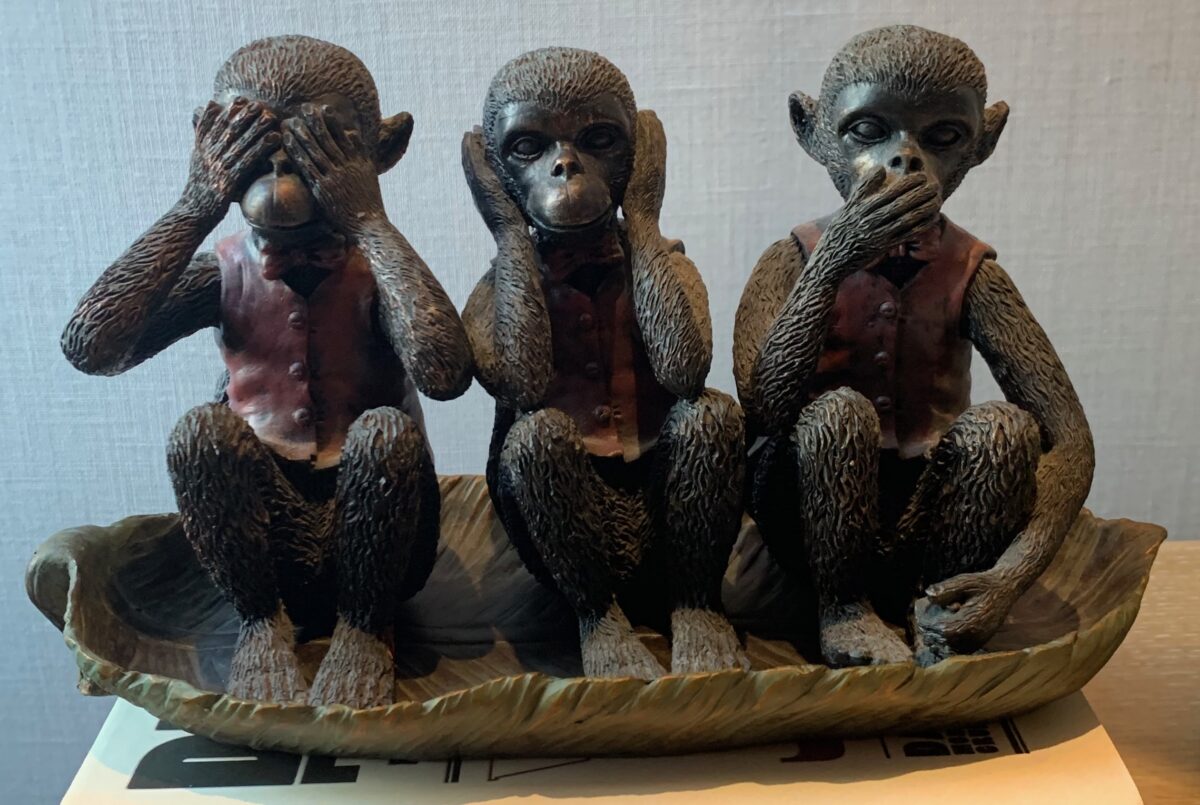 There was a Fourth Monkey?

This pulchritudinous primate piece portraying the proverbial principle “See no evil, hear no evil, speak no evil,” is sent to us by Millen, from New York City.  Very formal with their muted-red vests and bowties!  Fast thoughts: (1) odd for them to get all dressed up to take a bath together; (2) Why are they using a banana leaf as a boat? Where could they possibly be going?  (Probably getting the #@*! out of NYC these days!) (3) Hypothesis: this “3 Wise Monkeys” genre and the 1,200 year old origin of the proverb is not about wisdom, but was intended to be a public service announcement during whatever plague was ravaging the earth back at the time. Since they didn’t have surgical face masks, they just had to ask everyone to keep their hands over their eyes, ears and mouths when out in public? (4) The weirdest thing about it, has to be that Millen’s step-mom keeps that thing on her bedside table. Could you fall asleep with that next to you?

“Hey Dave, what are the monkeys names?”

Funny you should ask! When I started this piece, I did not know the monkeys had names. I really like monkeys, and I really really like funny stuff and it never even dawned on me that the monkeys might actually have names! While I was researching the origin of the proverb, lo and behold the monkeys have names! From left to right, Mizaru, Kikazaru and Iwazaru! Ha! That’s awesome. Can’t wait to bring that up in casual conversation, or need a name for a new pet, or …something. Like many great proverbs, this one is actually a Japanese play on words and a play on the names of the monkeys. Similar to the Swedish, “There’s no bad weather. Only Bad clothing.” “Det finns inget dåligt väder, bara dåliga kläder” See? It rhymes. A play on words — that’s where wisdom comes from!

“You’re still writing. You obviously want us to ask what else you learned about the 3 monkeys. …. So?”

This is GREAT! Our extensive research found that there is sometimes included a fourth monkey crossing his arms or covering his genitals or holding his nose. That’s a fact — I found it on the internet. SURELY that supports my hypothesis that the origin is more likely a public service announcement about being safe during a plague — cover your mouth, ears, nose and eyes (and …genitals?) when going out in public. It’s the 1,200 year old version of “wear a mask!” And, since there were no t-shirt iron-ons, local authorities made monkey statues to place around town to get the message out. Probably kiln-fired clay or chainsaw tree-trunk carvings.

There is even a book called, “The Fourth Monkey.” How great is that title?

“What about Gandhi? Surely he must have had something to say about the 3 Wise Monkeys?”

Per that same Wikipedia entry, “Mahatma Gandhi’s one notable exception to his lifestyle of non-possession was a small statue of the three monkeys – Bapu, Ketan and Bandar. Today, a larger representation of the three monkeys is prominently displayed at the Sabarmati Ashram in Ahmedabad, Gujarat, where Gandhi lived from 1915 to 1930 and from where he departed on his famous salt march. Gandhi’s statue also inspired a 2008 artwork by Subodh Gupta, Gandhi’s Three Monkeys.”

Yeah, that’s what I said!! Gandhi had one possession. ONE! And it was this statue! Think about that!! Same statue as on Millen’s step-mom’s bedside table. Gandhi peacefully changed the history of the world against the largest empire on the planet with one monkey statue. Hmmmmm….. interesting. I guess the message is, we could all benefit from having a little more monkey art in our lives. Way to go, Millen’s step-mom!

The Wikipedia entry on the 3 Wise Monkeys is an enlightening and really interesting short read. And you can read all about the fourth monkey.

Big thanks to Millen in NYC for sending this in! Who knew the 3 Wise Monkeys had names? And the Gandhi thing! Mind = blown.

2 thoughts on “The Fourth Monkey”