Sad days.  No. No, not politics, wars or pandemics.  Something much greater.  Chango the Baja Surf Monkey is endangered.  Borderline extinct.

Five years ago, an enthusiast-level primatologist who we’ll call T. Butcher (because that’s what I call him), sent me this photo of a small portion of his primate collection.  Last year, those same three pieces of art were stolen from his backyard.

Most everyone of my 8 regular readers recognizes Chango –  the painted ceramic surfing simian pictured above.  For the other 4 of you reading this who don’t recognize Chango, let me explain.

For decades, Chango was the ubiquitous Southern California Garden Gnome.  He’s a cheap, crappy, plaster-of-paris primate molded by the tens of thousands in Tiujana factories and was purchased at every border crossing for decades, by hungover gringos stuck in their cars for hours as they waited to drive back into the US.  Chango was displayed for miles in every direction — as far as one could see.  Every group of knuckleheads who road-tripped to TJ in the 80’s and 90’s bought one per carload on their way back and has their own blurry memories of a Tiujana trip associated with it. Remember when every boardwalk and carnival game prize in the whole country was a Spuds McKenzie stuffed animal?  Multiply that by a bazillion, for decades.  With your last $5, you could always count on getting a souvenir ceramic surf monkey and a pack of Chiclets on your way back.

I was hunting down some other rare monkey art pieces a few weeks ago in SoCal, when it dawned on me that I should easily be able to find a Chango for my collection and get an extra one to send to T. Butcher and surprise him.

“Odd,” I thought as I searched online.  “There aren’t any on eBay, Nextdoor, OfferUp or…. anywhere.”  [You know I was really thinking that, because it’s in quotation marks.]  “I can’t just walk out my door and get a Chango for my yard, and an extra one, to send to T. Butcher?”  This wasn’t supposed to be a project – just a minor errand.

Dig in.  Start exploring.  Going down the Baja Surf Monkey rabbit hole.  ‘Cause that’s what I do.

No surf monkeys for sale.  What the heck? Finally found a website http://www.surfmonkeyfellowship.com with all things Chango!  It points me in the direction of West Coast Paddle Sports in Pacific Beach, San Diego, online store, “Our friend Bob at West Coast Paddle will ship you the monkey of your dreams! (He’s better at shipping these precious primates than we are).”

So, I ordered one online.  A few days later was contacted by WCPS and they said they don’t ship them anymore – they break too easily.  They have one left in the store, if I wanted to pick it up.  Of course I did!

I arrived at WCPS and as I walked in the front door, there sat an enchanted crimson-and-white-stripped Chango, welcoming me from atop a display.  Here is the photo of their store on the front page of their website — Chango, front and center.  Bob was actually in the store that day, and I picked his brain on the odd unavailability of a Chango tchotchke.  Wow,  what a story!  Chango actually disappeared for a while, and was resurrected by Beth Slevcove.  The story on Slevcove’s savvy saving of the endangered Chango chimp appeared in a 2012 article in the San Diego Tribune:

“After decades of ruling the waves at borderline shops, the surf monkey’s popularity began to diminish with the introduction of more contemporary plaster-of-Paris pieces like Bart Simpson and Dora the Explorer. Eventually, production of the statue had diminished, molds were lost, and Chango’s future remained uncertain until a local surfer and longtime Baja traveler, Beth Slevcove, got involved.”

[I feel like there is plenty of room for Chango, Bart Simpson and Dora to peacefully co-exist on the acres of outdoor retail shelf space at the border, but I guess supply and demand is never wrong.  Sigh.  Millennials.]

She tracked down the Chango mold in a Tiujana factory and convinced the owner to sell it to her.  Apparently, Chango is still sporadically available in a few local San Diego surf shops. I love this next part. It seems that I (and my 8 regular readers) am not the only one with a passion for plaster primate pieces:

“By 2009, the Surf Monkey Fellowship was born and remains the only U.S. importer of the eight-toed plaster-of-Paris surf legend. …. Committed to preserving the 40-year-plus legacy of the surf monkey, Slevcove has learned a lot about Chango. Most notably, it’s actually not a monkey, but a chimpanzee (no tail). “This was confirmed by a primatologist,” chimes in Slevcove. “We take Chango very seriously.”

Beth Slevcove, as quoted in the San Diego Union Tribune

Chango ceramics are no longer available by the tens of thousands, however there is still a huge following and I think Bob and WCPS might be the only place left where these are sold.  https://westcoastpaddlesports.com/products/the-surf-monkey

PLEASE take your own Chango journey!  It’s fascinating!  Do an online search of “Chango the Surf Monkey”:

http://www.surfmonkeyfellowship.com/  You have to pour through every page of this site!!

2022 podcast with Beth Slevcove!!  “How did an icon of border tchotchkedom become nearly extinct?”

Spreading the Chango love!  “Chango–the best Friday the 13th ever”

In timely fashion for the World Series, a reader sends us a pic of a Chicago Cubs sock monkey.  Judging from the adjacent pillows and the stemless wine glass, this pic is apparently from someone who is a Cubs fan, a real “baseball guy,” and also a person who has aspirations to someday be a “wine guy” (cute, but baseball guys should probably stick with baseball and boats — wonder what box of pinot they were serving?).  It is also obvious from the attention to detail on the pillows and the cushion piping that there was a world-class designer involved in creating the interior of this boat.  Love both this nautical craftsmanship and devotion to primates. Go Cubs Go!!! 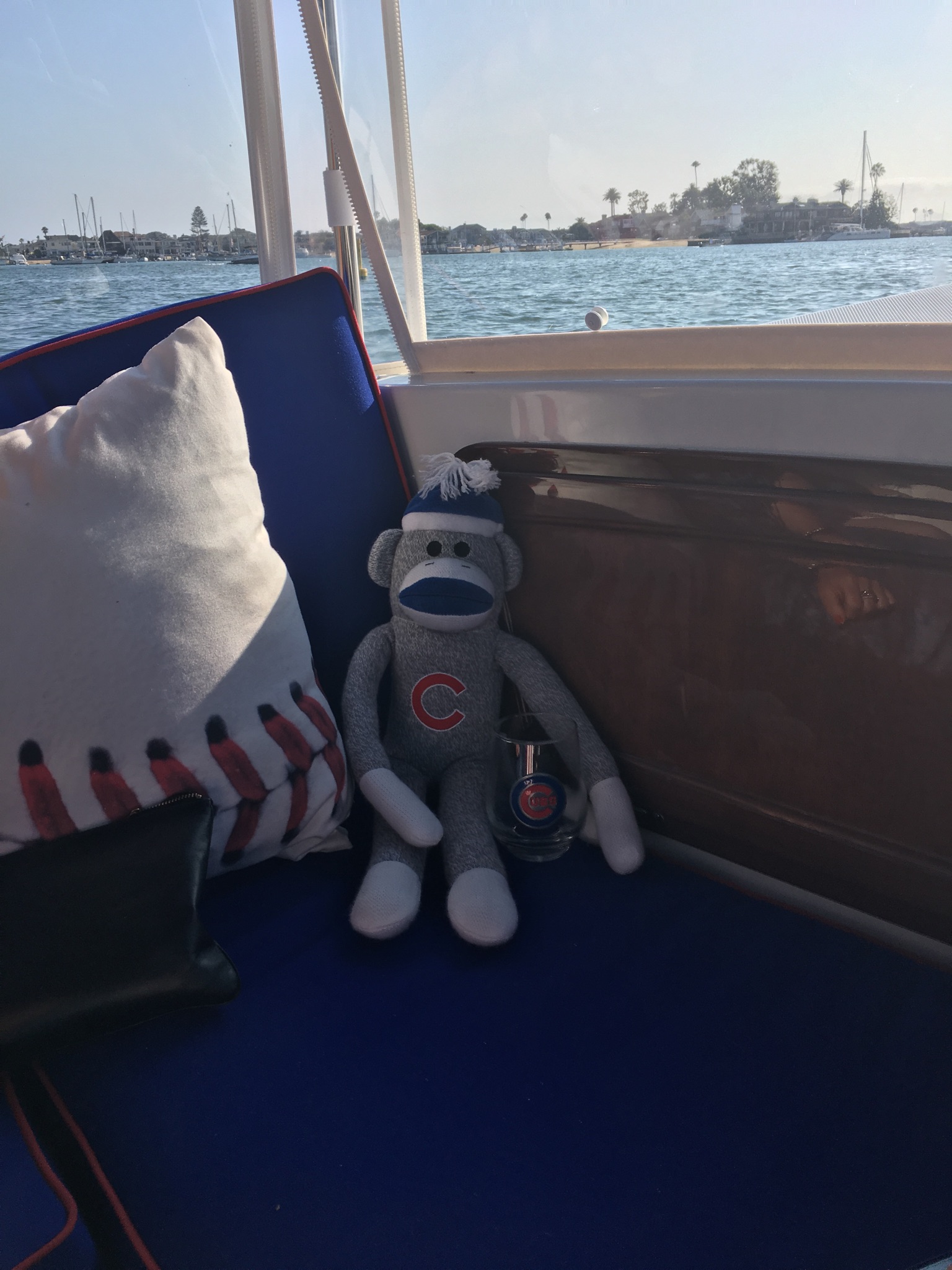 Pic sent to us from Newport Beach, CA.

We are thrilled that appropriately, WhoDoesntLikeMonkeys.com is foremost in your thoughts and deeds and that you used your work computer on company time to write to us!  The story you submitted is about a real monkey.  While we unequivocally advocate reading stories about monkeys during work, at WDLM, our focus is on the socially important, politically powerful and intellectually cutting-edge world of “monkey-related” items  — not real monkeys.

A SCULPTURE that depicts a monkey on a toilet has depth, inspires, and could theoretically end world hunger or change the outcome of an election.  A photo or video of an actual monkey on a toilet is more for Facebook or other things people do at the office.  For more on our editorial standards, please visit The Tao of WDLM.

If the real monkey story you submitted was about a talking monkey that wore human clothes and had a human job somewhere for a decade and no one noticed it was an actual monkey and not just a hairy short person who excelled at his job in senior management yet still brought the same thing for lunch everyday….well…then… yeah… THAT we’d publish.  The story (link below) about a real monkey —  maybe submit it to Ranger Rick magazine?

Thank you for your continued devotion to WDLM!

Though we would never publish anything like this, the above story was provided by one of our more brilliant readers, Krim Wryman in MA. 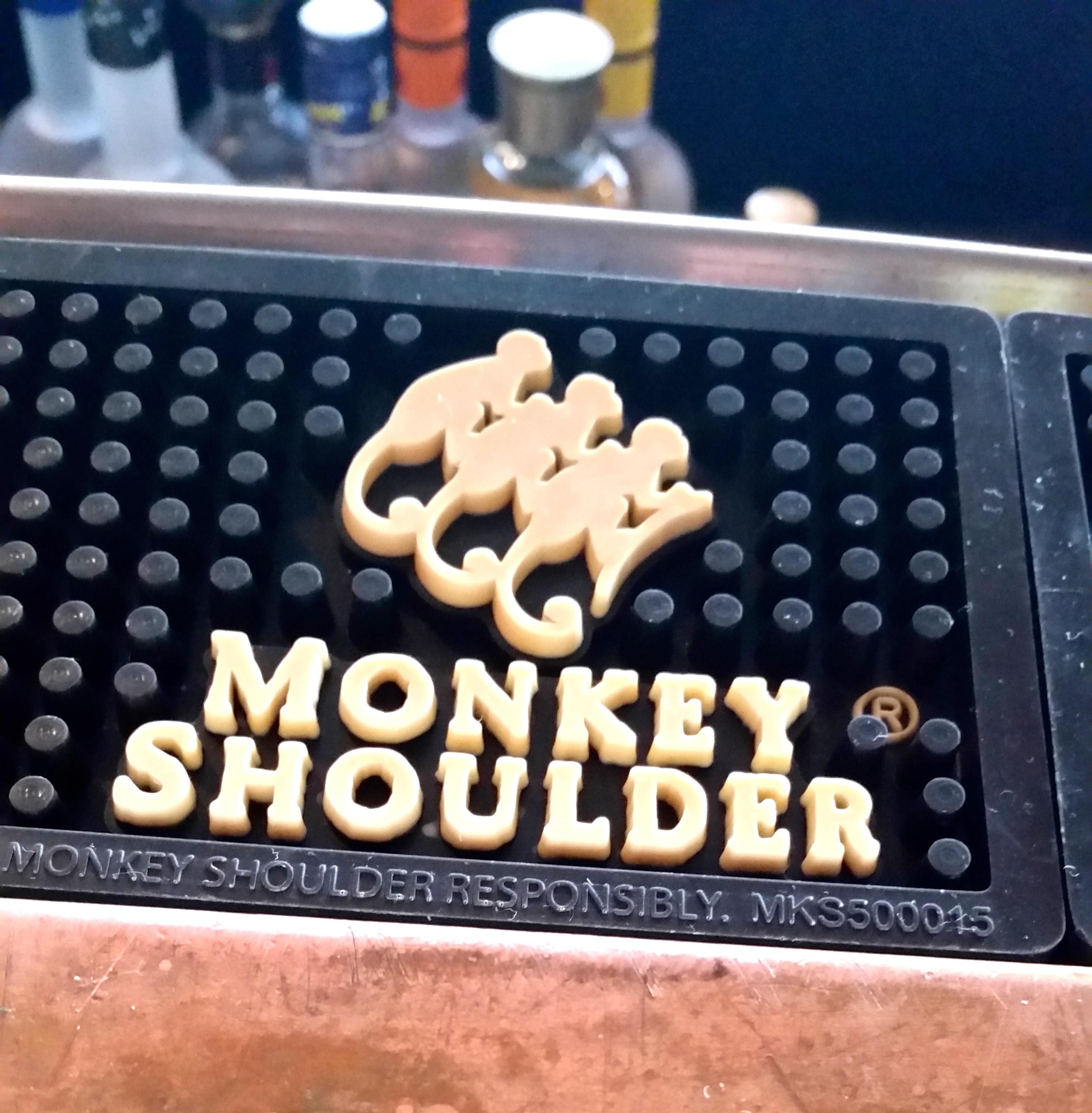 Me neither!  I’ve never heard of Monkey Shoulder.  Judging from the footer text on the tray and the context, easy to figure its an adult beverage of some sort.  Very odd set of monkey-related coincidences within 24 hours of each other, finds me sitting at a bar directly in front of this drip tray with monkeys on it.  I never heard of “bar drain drip tray” either.  I wasn’t sure what to call that thing.  “Bar drain drip tray” is the result of 15 seconds reading search results on the interweb.   ‘Monkey-related coincidences’ is a story for another time.

Does that sound appetizing to you?

This picture was taken at the bar at Driftwood Kitchen, Laguna Beach, CA.  http://driftwoodkitchen.com/

Yeah, this is the shower curtain I have in my house.  Actually, this is a .jpeg image file from an online Bed Bath and Beyond catalog for a monkey shower curtain that they offer for sale.

The above paragraph is much funnier if you read it, with this movie quote in mind:

[I’m guessing there are only 3 people in the world who will get that reference.]

So, where did the name for your website come from?

Glad you asked.  Part 1 of the story:  I dated a girl last year and we progressed all the way to the, ‘she will drive over to my place, and we will go to dinner from there’ stage.  As I was showing her around the many rooms of my 900 sqft of my house, we stuck our heads in the bathroom.  She looked at my shower curtain, paused for what was probably 3 seconds (but felt much longer) and in a eureka / big-revelation type of exclamation pronounced, “You like monkeys!” as if she had just uncovered a deep dark secret from my past.

My reaction then created that uncomfortable pregnant pause moment, and with a confused look and in a somewhat defensive (condescending?) manner, I spouted “Who doesn’t like monkeys?”

And, so we stood there for the next 20 to 30 seconds, pretty sure that the other was a little weird.  Like in that way Republicans and Democrats think, “how could the other person possibly think the way they do?”

That’s where the phrase “Who doesn’t like monkeys?” comes from.  I know.  I’ve got some issues.  But I really don’t think that “liking monkeys” is one of them.

Why the website?  I’ll get to that at some point.  Check back soon.