There are certainly a number of fascinating coincidences and synchronicities that we all experience in our lives.  Then there are occasionally these seemingly impossible, miraculous events that when they occur, they make you stop and realize that there is a much higher consciousness at work in the universe.

The ‘Monkey Pooping on a Toilet Bathroom Tile’ saga seems to be in that realm of the miraculous.  Rewind. My first encounter with the pooping monkey tile was when a friend of mine randomly sent me the photo from Florida that became the very first blog post on this site.  It was funny, hilarious and we had a few good laughs.  Then we all moved on to the next farcical piece of monkey-related art.  End of story, right?

Wrong!  I recently recevied this photo from reader Kevin Matsoni.  It is a tile he obtained from the Kringloop Ede thrift store in Ede, Netherlands.  He noted in his email that the tile was made in Greece.

Now, compare this to the original blog post pic: 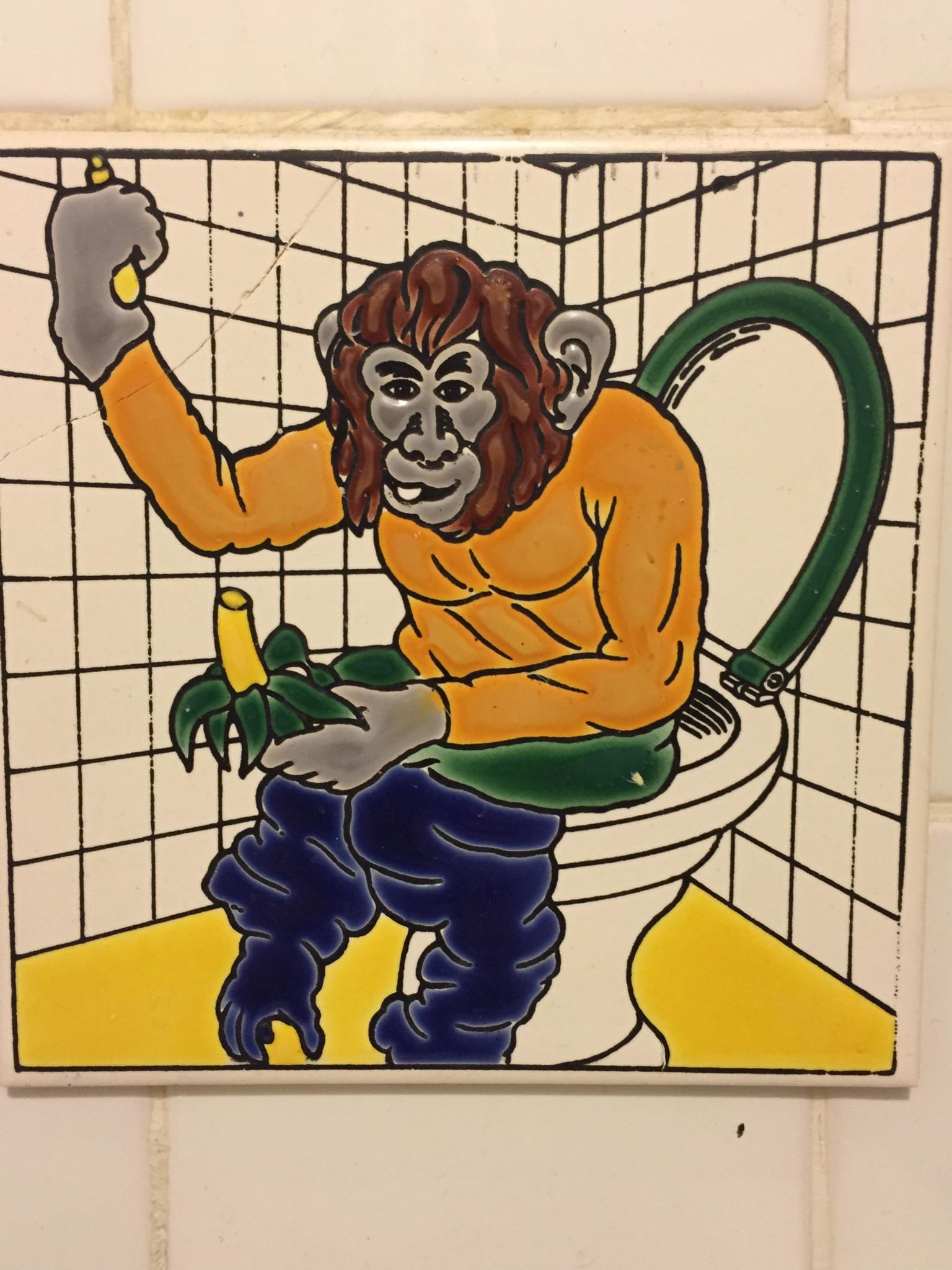 “Wow,” I thought. “That’s a real head-scratcher!” [Get it?  There was something curious about the similarity of the two tiles……. and also, one of the monkeys is scratching his head.  haha! I crack myself up sometimes.  🙂 ]

Initial research a few months ago after receiving the original (lower photo) tile revealed the bathroom tile masterpiece was inspired by a series of monkey images from the 1970’s that made their way onto posters and t-shirt iron-ons (when is the last time you heard the term, “iron-ons?”) with various hilarious slogans such as ‘Go Bananas.’  Some of the most famous include unfavorable comparisons of the U.S. Congressmen and other lawmakers to the banana-chewing primates-on-the-potty.  It was fun looking at all the creative ways these prime primate glossies were put to use, including (what I thought was) someone hand-painting one on a tile for some beautiful, unknown reason.

Then a few months later, I get the email from reader Kevin with a photo of a similar hand-painted tile with a different monkey image from that same series of photos from the 1970’s, and a note attached that says the tile’s origin is Greece and he found it in the Netherlands.  What the ____?  That certainly piques my curiosity.  Again, more research. Sure enough — there seems to be some kind of booming Greek cottage industry that hand-paints these images of a monkey pooping on a toilet onto actual bathroom tiles and exports them to all corners of the globe. Assuming that 60% of the time, 100% of what I read on the internet is true, I’ve found that several Greek restaurants have a tile like those above, in their bathrooms.  Some kind of national pride thing for the Greeks?

Back to my original thought.  If ever there was a doubt about the infinite intelligence of the universe, the nature of consciousness or the consciousness of nature, this blog post about two bathroom tiles of monkeys pooping on toilets, from completely different parts of the world somehow coming together and finding a common ground on my laptop screen surely puts that to rest.  Think about it. The confluence of ridiculous events that needed to take place for those two images to appear above, next to each other, is no less than an absolute and deliberate miracle.

Either that, or I have attracted a really odd subset of global citizens as readers.  I’d prefer to go with ‘miracle.’ 🙂

Big thanks to reader Kevin Matsoni for that pic and the info!  Hand-painted greek tradition and global phenomenon.  Who knew?